Rick MacPherson's 77 Bonneville. Rick says, "this particular 1977 Triumph was a one owner when I came upon it in a million pieces stored in a guys attic garage. He had purchased it from the original owner, and wanted to restore it, but never could come up with the required funds to do so. I had just finished doing my first restoration a 1976 Triumph and wanted to do another one. (They term it a disease!) This is the end result. It has come away with a newspaper article writen about it and taken first place for its catagory at the CVMG Ponoka Rally in 1999. 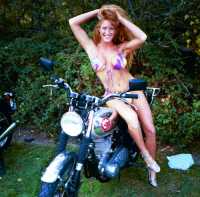 GoldStar Ron's latest. Ron says, "So, here is my 1957 BSA Clubman's. this jewel has a few mods to it, but then, I ride hard, fast, and with some more modern bikes, so I needed a good front brake, matched to a Phil Pearson motor, SRM - Boyer Electronic Ignition and a 180 watt Lucas alternator. Oh yes, this pic was at the last of Don Danmeir's birthday rides, we had just under 200 Brit Bikes, riding all around some great back roads of Northern California."

Ron's looking better than last March at the swap meet.

These gorgeous Vincents are forwarded by Rick Harris.

This Black Shadow belongs to Paul Zell. Paul writes: "...the bike is a stock 52 Black Shadow, with some non-cosmetic changes in the name of usability such as unleaded valves and seats, electronic ignition, o-ring chain, 8-1 low-expansion pistons and various engine and transmission seals that were not used originally. I painted it with PPG Concept Triple-Black, a single stage (no clear coat) urethane. I'm just a backyard painter, but I think all modern urethanes (PPG, Dupont, etc.) are all probably great stuff compared to the enamels and laquers of old."

Rick says, "The red Rapide belongs to John Laughney. I talked to him on the phone and he told me it was a 1950 HRD/Vincent transition model. In 1950 they replaced the HRD on the case with Vincent. But in the last half of 1949 they still had a lot of cases with HRD on them so they were ground off for the early 1950 model year. It was originally black. It was originally sold in Canada and was used in vintage racing until the 80's. It has been "Shadowized". It has the series D Shadow carbs (monobloc) and has Lightning cams from a Marty Dickerson bike. John crashed it in 1996 at Don Danmeiers all-Brit rally and it was rebuilt after the crash. John has had it up to 115 and he heard it did 130 when racing in Canada."

Pete the Cheap's G80 project bike. He writes, " Although i have recently bought a B50, i remain a Matchless man. Since the garage had to be rearranged to accomodate the rogue BSA, the project '57 G80CS came out for a breath of Sept. air. The fenders are home-made, with G15 front stays and fork brace from a Dommi sale, and pop rivet braces in the rear. the seat is RKLeighton, but all the rest is as found outside a Providence pub. Chrome galore. Whoops - the pipe is a gift from another {M} man, and the headlight is Dommi repro, too. But the basics are all - tho very much thrashed - original. The frame - straightened by Vern - was bent in 5 places. The triple crowns are very bent, as is the shaft of the right rear shock absorber. This bike lived such a hard life that it's amazing she lived thru it all.

I got the basic bend out of the tank - the bottom inside edges met in the middle, but John Bowe spent a year massaging and painting it back to original. He also did the oil tank, and the striping was done by Larry Hook, RI hot rod legend. Lund sleeved the original carb; Mark Seibert had the piston re-worked to take Total Seal rings, and Conti's hot rod shop made sure the cylinder was square to the crank and took the taper wear out. Some other hot rod buds at NE Engines did a 3 angle valve job and generally cleaned up the head. The lower end is untouched. Let us pray!

Thumpin' along, Pete the cheap.

Guy Scheers, from Belgium, is the proud owner of this BSA M20. Here's another view, and one before restoration.

He writes, "I found the old rusty bike in the garage of my grandmother when my grandfather past away. Before he died, I was not allowed to get in there, because his son (My uncle) died in an accident with the same type of bike.

The BSA was collecting dust for over 27 years! It was a pleasure to restore the bike. Fortunately I got some help from my brother, who you can see working on the picture.

Special thanks to my grandmother, my lovely girlfriend (Inge), my sister (Cindy) and my brother (Rudy).

Sam Simons, a hardcore two-stroker from Indiana, forwards this pic of his Commando. 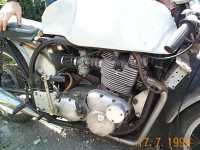 Paul Tye sends this pic of his neighbor's Triton. Paul says, "I cannot tell you very much about it, except there's a very tuned norman hyde motor, electronic ignition, Norton featherbed frame and all the body work that you can see in the picture."

And here's a pic of the bike with Ian, its owner. 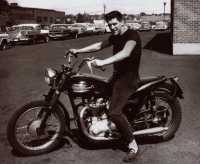 Mike Andrusiewicz writes, "here's a 1962 pict of my ole Uncle at 18 yrs (the one who got me started in biking) sitting on his bobbed fender Triumph. I don't know much about the bike........but its a cool photo! Last year my uncle rode my cafe'd FBM Norton special ~50 ft. before eloquently saying, " what in the hell is a matter with you....that's the most uncomfortable thing I ever rode". He never rode another machine before passing on in December of 98..........memories eh? :)"

Pete the Cheap's Matchless project bike, before and after. "This bike was bought as a collection of mismatched parts in 1983 - a '55 frame with a '50 motor, but it rolled. I fell in love with MNT 671 in Keith Jackson's Matchless Singles Portfolio, and decided to copy it to the best of my limited ability. The after photo was taken 4 years ago, and since then the rear tire has been replaced by an Avon SM, and a '57 parcel rack added. The proper iron barreled motor is out for repair, and it is propelled by an AJS 18C, which makes it go pretty well."

My wife bought the bike for me for our first anniversary.

The bike now has 28,064 miles on the clock. And you can see all the excessive chroming that was done! If you look close enough, you can see the drill work, too. Phooey!!!! " 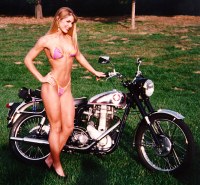 Dale's 1969 BSA Rocket 3, completely stock - as seems to be usual for Dale's bikes, it also has won many awards.

Jim Piercy's 1973 Norton Commando Interstate which he's owned since new. It now has 32,000 miles on it and runs very nicely. It was given a cosmetic restoration in 1995.

This is Doc Harms' 1957 TRW, 1600 original miles. Purchased with seized engine and in generally deteriorated condition. Mileage appears to be genuine as all cables, brake linings, chain etc. were original equipment when received at 853 miles. Low mileage appears related to minor shunt in front traced to non-original manufacturer rim and front lower fender stay being installed upside-down when received. Rehab consisted of new rings and primary chain, rechroming and replacement gas tank painted and striped to match patina, color and fading of other body parts.

Robin Mullett sends these pics of Norm Scott's  '51 Douglas Mark V twin carb sport model. Robin has pictures of all the Cole collection as well as some other rather unique bikes that reside in Victoria BC.

Norm Scott's Douglas MKVI, 1956, known as theDragonfly. This was the last year of production for the Douglas.

Doc's 1943 M20. Correct including canvas grips. Incorrect only with respect to gloss paint.

Here is Doc's Italian-English hybrid, believed to be from Maserati. Extremely well done modification of WW2 Triumph 3HW using Triumph engine, transmission and frame center section. Reviewed by Mick Walker who endorses the theory of factory jig-built modification kit rather than home-built bitsa. It is well noted among Maserati enthusiasts that the original Maserati brothers began their vehicle production after the war marketing a kit such as this for abandoned/captured WW2 British motorcycles. Black and white photo is of bike as received. Red ('93 Viper color) applied during ongoing restoration.

Michael says: It's a 1975 Mk111 interstate. I added the "Goldwing" because of the schoei bags, windkutter fairing and crash bars. Its got less than 10,000 miles, although I'm trying to run them up. I got it two years ago as a paint bomb black roadster with high bars and a sissy bar. It had been sitting for at least ten years and had a bent mainshaft. It doesn't leak oil, the e-start(with four brush starter motor) works with a good charge on the battery and the front brake (with chrome skimmed off) is pretty good. Future mods may be an RM24 alternator and a single SU carb and less restrictive air filter. Thanks to T.C. Christianson who has done all the work.