Somehow the air/fuel mixture has to be ignited. It's really important. It needs to be lit at exactly the right time, every time. So why have motorcycle manufacturers put such wimpy ignition systems on their bikes?

My first bike was a '36 Harley. It had points and a condenser and a coil, which was a good ignition system. In 1936. Then I got a '52 Triumph Thunderbird which I just loved - except for the ignition system. It had a magneto from the beloved electrical works of Joseph Lucas, the Prince of Darkness. I guess the English thought magnetos were better than points-condenser-coil systems. Well, maybe - while a points system puts out a weaker spark at high revs, just when you want a more robust spark, the magneto puts out a stronger spark when it's spun faster. At least they said it did. But there was a down side to this characteristic: when you were trying to start the damn thing (with a kick starter, no electric starters in those days) the magneto put out its weakest spark. Or, just as often, no spark at all. A coil/points system, by contrast, puts out its hottest spark at low revs.

There was a scheme that managed to combine the worst characteristics of both these systems - a design so poor that even Lucas wouldn't use it. It was called the "energy transfer system" rather optimistically, since it didn't transfer a whole lot of energy to anywhere. I had such a system on the wonderfully quick and lithe Bultaco Metralla in the '60s. I thought nothing of pulling over to the curb, getting out the flywheel extractor and cleaning a nearly undetectable film from the points. Seems like I went through this exercise about every two weeks. Now that was a weak spark. The Bultaco was Spanish, but as I recall the Italians went one better than the Spaniards: they had an energy transfer system on one bike, it might have been the Benelli, where the ground return for the e/t ignition was through the taillight. Here's a great scenario - you're riding your buzzy 175cc single at night, in the rain, (really, we were that brave/stupid) and the filament in the taillight vibrates to death. Again. Guess what? No taillight, no ignition spark, no go.

Then came the Japanese. Took all the adventure out of motorcycling, they did - at least with the four-strokes. You could just ride the thing, never opening your toolkit for months on end. And we were back to points-condenser-coil systems, just like thirty years before. (There was an electronic ignition system on some of the Kawasaki triples in the '70s, but they generated so much radio hash and television interference that they were abandoned and Kawasaki went back to points-condenser-coil again.)

About this time the Yamaha RD350 took the sportbike world by storm. It was called the "pocket rocket", it was quick, it was cheap. And it had one of the worst ignition coils ever made. If you had an RD and were using Yamalube oil in the injector system (or worse, as premix at 20:1) you'd better carry extra spark plugs in your pocket. Even with perfect carburetion you'd be replacing fouled plugs every couple of weeks - and if the carburetion wasn't perfect, it could be every day. A sandblast-type spark plug cleaner was a good investment.

Sometime around 1975 the lads at Cycle Magazine wrote an article about their experiments with coils for two-strokes. They tested the pitiful stock coils and several aftermarket automobile coils and found huge gains in spark strength with the car coils. Immediately RDs everywhere had two car coils strapped to the frame downtubes, ballast resistors replaced the stock coils under the tank, and things were much better.

Here's an area where we can thank the Feds and their smog regulations: if they hadn't been forced to, the manufacturers would never have changed from points-and-condenser systems (or worse) to electronic ignition systems and we'd still have to carry a pocketful of spark plugs whenever we leave home. 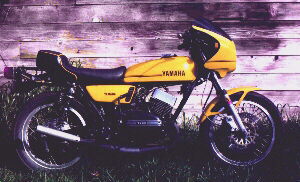 For twenty years or so I ran the car coils on my beloved RD350. It was a lot tidier after I installed the RZ350 fairing, I could hide the coils under it. If the carburetion was wrong, though, it was still easy to foul spark plugs - and if you had tossed the stock airbox and installed K&N air filters, as many did, it could be a long time, or never, before you got the carburetion right. The sparkplugs wore holes in several jacket pockets. Still, once the carburetion was right (using synthetic injection oil) I could get more than 3000 miles on a set of plugs.

I recently found a manufacturer who is still making electronic ignition systems for the RD and I just installed one. It works beautifully, good hot spark, no more points adjustment. It's the Piranha system from Newtronic Systems Ltd. Recommended!

The ignition points are simply a switch that's opened and closed by a small cam on the end of the crankshaft (in a two-stroke). While the points are closed, current from the battery flows in the series circuit comprised of the coil primary and the points. Nothing happens when there is steady current flow in this circuit. But when the points are pushed open by the points cam, current flow abruptly stops and a very useful phenomenon comes into play: the sudden ending of current flow in the inductor that is the coil primary causes a collapse of the magnetic field that had been set up by the steady current flow. The sudden collapse of this field generates an "inductive kick" (properly called counter-emf) which is of much higher peak voltage than the battery voltage that had been causing the steady current flow. If the battery voltage is 12 volts, the peak voltage of the counter-emf will be around 200 volts across the primary of the coil. With a turns ratio of 100:1 the peak voltage in the secondary coil will be 20,000 volts which should be enough to fire the spark plug.

So what does the condenser do? First of all, it's properly called a capacitor, has been since the late 1940s. A capacitor can be thought of as a device that blocks direct current (DC) but allows alternating current (AC) to pass through it. The inductive kick we generated with the opening of the points starts in the primary of the coil, flows through the condenser which is connected across the open points, and passes on to ground (the chassis of the bike) to complete the circuit back to the battery.

Electronic ignition systems are usually CD systems. Here we still have the ignition coil, as in the other systems, but there is no steady current flow in it. Instead, there is a capacitor in the black box that's charged to several hundred volts by an electronic oscillator that steps up the 12 volts DC from the battery. Then, at the right time, a switch (usually optical or magnetic) that's actuated by a disk on the end of the crankshaft puts out a pulse that causes a switching transistor (also in the black box) to dump the capacitor's several hundred volts into the coil. The coil is now just acting as a transformer that takes the 300 volt pulse and transforms it to about 30,000 volts for the spark plug (remember the 100:1 turns ratio). There are three major advantages over coil-points-condenser systems:

The ignition coil in an OEM (original equipment) CD ignition system has less inductance than a conventional ignition coil, allowing an even faster risetime, but aftermarket systems often use the original standard ignition coil. If the aftermarket CD system can handle the higher switching current of the CD-type coil it will produce a hotter spark. I'm going to investigate this issue with my new Pirhana CD system. Stay tuned.